The Biggest Mistakes I Made Starting a Business

I hate generic startup “advice” articles.  No one needs to read another listicle on “Top 5 Legal Mistakes Startups Make” or “LLC vs. Corporations? A 36 part analysis of which is better for you.”

I’ve always found the war stories that eschew the theoretical for the real to be way more valuable.  There’s no greater (or harder) wisdom to share than that which has been earned via countless mistakes, missteps, and miscalculations.  Anyone who has been through the tumult of launching a business knows that experience is by far the best teacher. The most valuable lessons often come from growing pains, unexpected challenges, and hard truths.

There is nothing more admirable than the CEOs and founders that (whether in public or behind closed doors) dare to open their kimono and share the lessons they’ve learned the hard way.  To that end, I wanted to return the favor for all the incredible (and hard-earned) advice that I’ve received over the past decade.  If we’re being candid (and I hope we are), I probably made too many mistakes to count.  The handful of examples below are really just the tip of the iceberg, but they are the ones that resonate with me (or maybe just embarrass me) the most almost a decade later.

Without further ado, here are the Biggest Mistakes I Made When Launching Wertman Law:

1. My Business Plan was All Theory and No Tactics.

I thought that if I gave big firm-level service at a 40% discount and with 10-20% of the relative overhead, then I would make more money and work fewer hours than I did at the firm.  That worked really well in theory, but in practice…not so much.  It’s almost laughable in hindsight how little of a plan I had.  I think I just assumed that my hypothetical target clients would be hypothetically lining up to hire me once I hung my hypothetical shingle. I honestly never once thought about how I would take the theory and turn it step-by-step into reality.  I had no actual tactics for reaching my target audience, so I wasted an incredible amount of time and energy “marketing” without really having a plan.  With a few bad breaks, that misstep might have been fatal. If I could do it over:  I would have spent time thinking about who my actual customers were and how I would plan on getting in front of them in reality.  Before I ever launched, I would have asked for feedback from potential clients and adjusted my plan accordingly.  With adjustments, I would have had some semblance of a sales funnel and process in place by my launch.

2. Assuming that I Could Learn “Everything Else” Easily and On the Fly.

I mistakenly thought that operations, finance, accounting, billing, business development, marketing, invoicing and collection processes were “incidental” to my core business and, worse yet, that I didn’t need to prioritize them to run a business.  I assumed that if I was good at practicing law, which was likely a bold assumption at the time, then 99% of my bases were covered.  Turns out all those “little things” are just as (if not more) important than your core product or service.   It’s all those unsexy and grueling behind the scenes tasks that really make a business run (or fail).   Running a business or founding a company is all about making those things work.   If I could do it over:  I would have prioritized having detailed and well-thought processes for all the “boring” things that came with running the business.  I didn’t really feel that pain until things started to get busier and it was challenging to make improvements on the fly.

3. Not Designing to Scale from Day 1.

Hindsight is a cruel mistress. Looking back on things, the simplest mistake I made was to have a business plan that was entirely dependent on me.  The (now obvious) problem with that approach is that everyone has a finite amount of time and, more importantly, energy.  If you’re lucky enough to grow a business completely by yourself, you’ll quickly find yourself running out of both.  Once Wertman Law grew, I was stuck in limbo.  I desperately needed to add resources and processes around me but did not have the time to do so because I was so wrapped up in the day-to-day of keeping various plates spinning.  I simply did not have the bandwidth to adjust things on the fly.  Ultimately, I think that cost me a few years of progress (and many stressful 80+ hour weeks) until the light bulb finally went off.  Just as a founder needs to be emotionally ready for failure, they also need to be operationally ready for any modicum of success. The younger, naiver me, wasn’t prepared for neither.  What I would do differently:  I would have realized that I was confusing being unprepared with being “lean.” I would have invested the time, money and energy to add resources and team members much earlier.  I would have had a plan that wasn’t centered on being personally productive 24/7 or becoming proficient in things that were outside my sweet spot.    These days, I’m lucky enough to have the best partners anyone could ask for and an incredibly helpful support team.  Today, growth isn’t as scary, and we are more than prepared for whatever happens next. We are still learning every day, but I can say with certainty that things are 10x better and easier than they were when I tried to do everything myself.  I just wish I would have learned that lesson a few years earlier.

This list is far from exhaustive.  Conservatively, I made dozens of other mistakes (large and small) over the last decade.  I’m sure I will continue to make many, many more along the way.  Thankfully, that’s part of the process that I’ve learned to be grateful for.

My best piece of advice to any founder/CEO (no matter what stage of their career) is to find peers and mentors that you can talk to honestly and openly.  Have conversations that go beyond saying “Everything is great, we’re killing it” to each other over and over again.  Don’t be afraid to ask for time, advice or support.  There’s no perfect antidote to the chaos that comes with starting and growing a company, but I promise that others have gone through the same issues you have and can help get you through it.  Sometimes, you just need to ask. 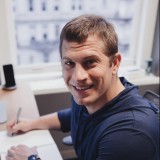